I have a Möbius strip. On one side of it is Boris Johnson, on the other, any of the nastier ayatollahs. They merge seamlessly into one another. Johnson’s jibe about letter boxes has had exactly the required effect – attention. Two separate issues become one here: Muslim patriarchy and Johnson’s pursuit of power. 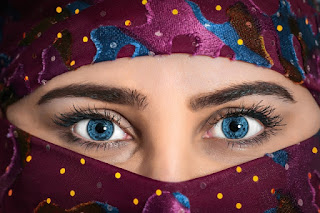 Johnson’s article about the clothing of Muslim women is formed as a liberal wrapper round a racist dog whistle. The liberal wrapper serves to deflect expected criticism of the dog whistle. Johnson is not a liberal. He adopts liberal policies, or at least liberal words, when they aid his pursuit of power. You might equally think Johnson is not a racist. He adopts a racist tone when it aids his pursuit of power. It is possible to adopt a liberal tone without being liberal. It is not so possible to adopt racist tropes without being racist.

If you want to make a liberal point about a particular form of oppression, you do not in the same breath make jibes at the victims of that oppression. If you have to make jibes – and Johnson does – you make them at the perpetrators of the oppression, not its victims. But that was not the purpose of his piece. The purpose was to take another step on the road to power, and in that he has succeeded. Stephen Williams suggests his time might be up. I think not. His latest nastiness has cemented dislike among those who dislike him, but it has also cemented his popularity among the disparate groupings of flaccid to hard right wingers who he hopes will propel him to power.

Johnson possibly did not intend to cause an upsurge in abuse. But he could certainly predict that it would happen – as it has - and was reckless as to whether or not it did.

Any effect on Muslim women was a by product of a step in Johnson’s careless ambition. To that extent we go back to the Möbius strip: Johnson is as patriarchal as any fundamentalist Muslim. And also racist. There is a debate to be had as to whether the wearing of a niqab signifies oppression. In some cases it does, in some it does not. Where it does, the liberal answer is not to ban them. Johnson is fortuitously right there. But instead of enforcement by law, there must be a liberal effort to engage in dialogue aimed at making that particular segment of our society more liberal. We engage in that dialogue. Johnson, slave to his own ego, does not.
Posted by Rob Parsons at 12:36