The best 0-0 draw in Spurs' history without a doubt. I wish I'd been there; the crowd were awesome, and Tottenham's maturity as a football team was evident for all to see. It's very nice to see today how matches like that bring out the best in commentators. Prose that is a pleasure just to read, almost lyrical in places. 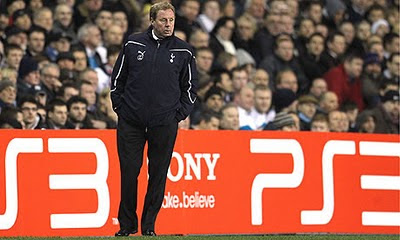 Phil McNulty on the BBC: "The demolition of holders Inter Milan on a thunderous night was a demonstration of Tottenham's threat but Redknapp may take even more satisfaction from the way Inter's neighbours were sent out of the tournament.... Who would have thought erecting a defensive wall of defiance would deliver such pleasure and provoke such scenes of jubilation?

"So it proved as Spurs survived a Milan performance that carried much of the pace and intensity absent from the first leg. As time ran out and Milan became even more desperate, the obstacles in front of keeper Heurelho Gomes grew bigger in stature and number by the minute....

"Life was lived on the nerves from first minute to last, with Redknapp standing sentry in his technical area almost permanently and joined on a regular basis by trusted lieutenants Joe Jordan and Kevin Bond. It was not a night, nor an atmosphere, for sitting serenely in the dug-out."

Steven Howard in the Sun: "FIRST, the agony. And then the ecstasy. It was another one of those rollercoaster nights for Tottenham fans. The agony of enduring 90 minutes where it seemed that at any moment the dream of attempting to match the historic exploits of the Glory, Glory boys of the 60s could go up in smoke...

"...the greatest sound of all was the final whistle. After four straight home wins and 14 goals, finally a goalless draw. And it tasted just as sweet. Spurs were through. Arsenal were out. And Spurs supporters were still in one piece. Just."

Jason Burt in the Telegraph: "There are still moments in the storm. There are moments when the release of tension simply results in a desire to stand motionless. Henry James Redknapp was a study in such behaviour on Wednesday....

"“Life is a roller-coaster,” Redknapp said when asked about how he would celebrate. “I’ve had my ups and downs”. And sometimes the ups lead to a more sober response than the downs - it’s a mark of many leading managers, including Carlo Ancelotti - and he followed that mould last night. In a quieter moment hopefully he also afforded himself a smile for he has transformed the fortunes of a club that was bottom of the Premier League table when he arrived three years ago. He deserves the praise....

"Spurs didn’t play particularly well, they weren’t allowed to, and maybe that is what caused Redknapp’s irritation. If so, it smacks of a professionalism also. Everyone is talking about the need to avoid Barcelona. But those left in this competition will also be privately whispering another team they would be keen not to face. No-one wants Spurs. No-one wants to face Redknapp."

Shaun Custis, in the Sun again: "Spurs' job has traditionally been to entertain and lose gloriously while Arsenal, Chelsea and Manchester United get on with the serious stuff. The times they are a changing. Redknapp claimed Spurs were not built to defend but he is conning us all. They have learned how to do it and they do it very well."

Richard Williams in the Guardian: "For Harry Redknapp there have been many big occasions in football but none, for a real football man, bigger than this night. Milan, seven times winners of the European Cup, under the floodlights at history-soaked White Hart Lane, confronted by the white shirts of the descendants of Blanchflower, Smith and Jones. A match with Brazilian artists, Dutch magicians, a Croatian wizard, stalwart Englishmen....

"Redknapp paced the technical area with his usual preoccupied air as a more purposeful Milan made the best chances of the half, drawing sprawling saves from Heurelho Gomes, watchful leadership from Michael Dawson and a clearance off the line from William Gallas. Against this barrage in a game of ceaseless movement and clattering energy, Spurs could point to little more than Rafael van der Vaart's bar‑skimming 30-yard free-kick.

"Milan huffed and puffed but by the end they were, in the words of the original Harry Hotspur, no more than dust and food for worms. Hotspur was dying at the time. Redknapp's Spurs could not be more full of life."

Prose to fit a sumptuous occasion.
Posted by Rob Parsons at 13:09